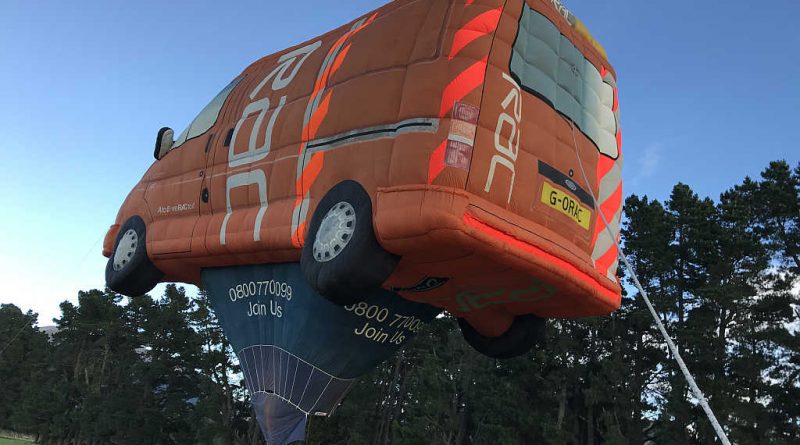 Joining “Bud E Beaver” and “Iwi the Kiwi” in the Wairarapa skies this long Easter Weekend is the “RAC Van” all the way from the United Kingdom.

The Van was built by Cameron Balloons UK for the RAC (UK’s equivalent of NZ’s AA). It weighs in at 325kgs, is approximately 30m tall and has yellow flashing lights. Pilot Graeme Church, who operates Pendle Balloon Flights in the UK, and has recently taken over Aoraki Balloon Safaries in the South Island – says he will have the best of both worlds now spending six months of the year in each hemisphere.

Graeme started flying aeroplanes in 1976 and moved onto balloons in 1989, before obtaining a variety of licenses while working for Aoraki Balloon Safaries.  Now, with 2,500 flying hours under his belt, he is a UK Balloon Flying Instructor and a competitive balloonist finishing 3rd overall at a well-known Balloon Festival in Metz in France, in which over 500 balloons took part.

Wairarapa Balloon Festival Organiser Robyn Cherry-Campbell says having a third special shape balloon attend this year’s festival which gets underway in Carterton on Thursday, 29th March is an absolute bonus.

“Graeme attended last year as a spectator, and it’s a pleasure having him back with such a cool special shape – this one is definitely not just for the kids,” she says. “It will also be an added attraction at this year’s Trust House Night Glow at the Solway Showgrounds.”

Robyn is also excited to be adding a couple of “pop-up” events to the Festival programme, which have been sponsored by Masterton’s House of Travel.

“We are aiming for a bit of ballooning flash-mobbing to entertain locals and visitors,” she says. “There will be prizes and giveaways for those people who turn up and to find out when and where the balloons will be ‘popping up’ people can follow our Wairarapa Balloons Facebook Page.”

While the 2018 Wairarapa Balloon Festival will be held over Easter weekend, it opens with the More FM Mass Ascension balloon lift off at 7:00am at Carrington Park in Carterton on Thursday, 29th March. Other events will include the Tranzit Burner Parades in Greytown and Carterton, the McDonald’s Park to Paddock flight on Good Friday, the popular Resene Splash n Dash at Henley Lake on Saturday and later that evening, the Trust House Night Glow at Solway Showgrounds, where family entertainment is provided and tethered balloons light up the night sky (bad weather back-up day is Easter Sunday, 1st April). There will also be an opportunity to observe the skill of the pilots as they attempt to drop markers on targets in Martinborough Square at Te Kairanga’s Meander over Martinborough on Easter Sunday before the festival concludes at Queen Elizabeth Park in Masterton for the Property Broker’s Final Flight on Easter Monday.

Ballooning is weather dependent so decisions can only be made on the day. To see whether the balloons are flying check out the Wairarapa Balloon Facebook page www.facebook.com/WairarapaBalloonFestival.